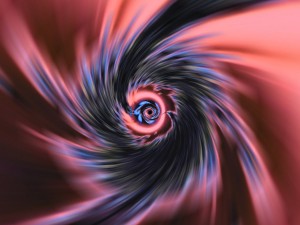 Space-time is a mathematical coordinate system (3 dimensions of space and 1 of time) in which physical events are located in a single continuum.

According to Einstein’s Theory of Relativity, gravitation is the “curvature” of space-time. In other words, because an object’s mass makes the curve of space-time bend like a basin in its region, its gravitational force is amplified and attracts other nearby masses.

Things are going well up to this point. But imagine for a moment if you could undertake a sudden “reversal” of gravitation. Would you also experience a swift U-turn of space-time? If the force of the Earth’s gravitation is initially low under your feet, but abruptly gets reversed to a point high above your head, what kind of space-time turnaround might you undergo?

The reversal of space-time has far-reaching implications. . .

The Hollow Earth hypothesis, first put forward in 1692 by the English astronomer Edmund Halley, proposes that the planet Earth is either completely hollow or encloses an extensive interior space. The hollow Earth supposedly contains a small interior sun. There are said to be entrances at the north and south poles. During World War II Hitler sent an expedition to the Baltic Island of Rugen to search for proof of a hollow Earth.

Today, that theory has be extended to suggest that the hollow space that connects the north and south poles is really the throat of a space-time wormhole, and the interior sun is actually a rotating black hole, which is prevented by an event horizon from crunching the Earth. . . Read Complete Report