Mexico Border Watch: Stryker tanks, the Cadillac of combat vehicles, on the Border 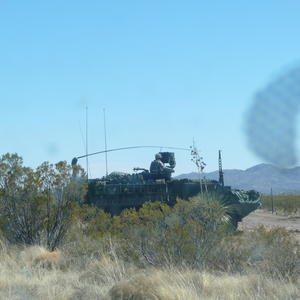 from the North American Congress on Latin America
March 7, 2012
Todd Miller
Border Wars
On February 26, I was driving with a friend in an isolated region of the U.S.-Mexico border in New Mexico when we saw a military tank positioned to be looking south. A lot has been said, written, and documented about the degree and ongoing process of border militarization, but I had never seen anything like this. We were on route 9, just past Playas but not quite to the border town Columbus.

The combat vehicle was such a surprise that I hit the brakes, did a three-point turn, and drove back to make sure that we weren’t seeing things. While turning, a soldier came up through the top of the tank with a desert camouflage helmet and looked our way. We waved at him awkwardly, and he waved back. He then leaned forward into the surveillance equipment outfitted for the tank. In front of him was the vast highland desert of southern New Mexico. We were about 20 miles away from the physical border line. Any blurriness in the pictures is probably due to the fact that we had to take the photos in motion, without stopping.

[The photo above] . . . was the first of three such combat vehicles that we saw. . . . Continue report w/more photos