Terror from the deep: Nazi dive bomber hoisted to the surface after 70 years at the bottom of the Baltic (w/video) 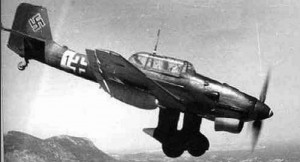 It would be vaa-ley interesting to find out this Nazi dive bomber’s mission and destination up there in the Baltic , , , EDITOR

Its distinctive sirens would have been heard moments before it dropped the bombs over Poland that set the Second World War in motion.But despite its important role in history, very few German Stuka dive bombers survive to this day.There are currently only two complete planes still around – and neither on display in Germany.But now German military divers are working to hoist the wreck of one of the single-engine monoplanes from the floor of the Baltic Sea. . . . Read Complete Report

A short video about the JU87-Stuka Dive Bomber.

From it’s conception, to the early days of WWII.