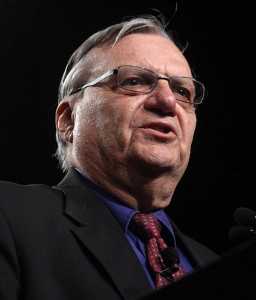 One again Sheriff Joe is standing up to Obama’s trying to weaken States Rights. . . . EDITOR

The long feud between “America’s toughest sheriff” and the nation’s president just got longer.Sheriff Joe Arpaio said Friday’s move by President Barack Obama to give amnesty to children of illegal immigrants is politically motivated and will encourage more Mexicans to cross the border but that he will still enforce all immigration laws in his state of Arizona.

“It seems to be politically motivated,” Arpaio told a Phoenix ABC News affiliate. “I would rather see the president let the Congress decide what to do with this issue and other illegal immigration problems.”

For the Maricopa County sheriff, this is yet another battle in a simmering war with the White House.  Last December, the Justice Department released a scathing report accusing Arpaio and his office of committing a wide range of civil rights violations against Latinos. Justice Department investigators said the abuses included a pattern of racial profiling. . . . Read Complete Report