Oceans on Titan a near-certainty according to Cassini spacecraft 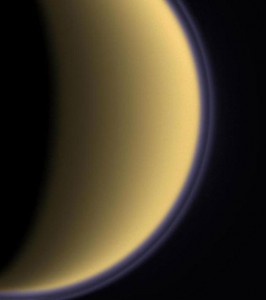 The icy surface of Saturn’s largest moon, Titan, is almost certainly hiding an ocean of liquid water according to data received by NASA from its Cassini spacecraft. The finding could shed light on the mystery of how methane in Titan’s atmosphere is replenished.

NASA’s conclusion is based on the extent to which Titan changes shape as it orbits Saturn. Titan elongates with proximity to the gas giant, and reverts to a more spherical form when farther away. But it is the extent of this “bulging” that has surprised NASA scientists.. . . Read Complete Report

Breaking News: Some scientists discovered lakes and ponds on Saturn’s biggest moon Titan, the lake is twice the size of lake Champlain in the State of New York just to give you an Idea Awesome.Music, Artwork & video by Didier Manchione all rights reserved Moonfull publishing Socan Canada 2012 MUSICNEWS NETWORK.