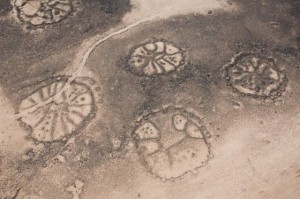 MessageToEagle.com – Thousands of huge ancient structures made of stone are clearly visible from the air.

Their age is estimated to thousands of years and their purpose remains unknown.

These puzzling wheel-shapes, and straight lines, stretch all the way from Syria to Saudi Arabia.

Some call this area the Middle East’s own version of the Nazca Lines.

It is only recently, with help of satellite images that archaeologists have been able to explore this region in more detail.

Since the launch of Google Earth in 2005, archeologists have begun to use the satellite imagery publicly, particularly since its gradual incorporation, beginning in 2007, of high-resolution images. As a result, over some Arab countries-Jordan, Syria and Lebanon particularly-the resolution of available images is now generally high enough to conduct reliable, general archeological surveys.

The Shuway-mas site south of Hayil, Saudi Arabia, which is not even mentioned in the 1998 edition of the Cambridge Illustrated History of Prehistoric Art is the home of one of the four best collections of ancient rock art in the world. Here we find, numerous ancient stone kites, mounds, and tails. . . . Read Complete Report w/photos