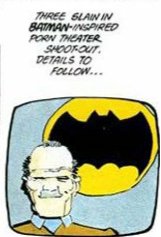 Here we go again. There’s going to be a lot of speculation regarding this Batman movie shooting. It fits too perfectly into their gun control agenda build up of late for it not to be staged but we’ll have to see. But already we’re seeing the same pattern of foreshadowing and predictive programming.

If you want a real hint, this report just showed up in the Washington Times of all things. They’re of course insinuating it was possibly the inspiration for the shooter. We’ll be learning more about him quickly but from his disturbed profile he sure seems to fit the usual mind control pattern.

What is strange is how prevalent this comic-type illustration predictive propaganda is with these false flag events. . . . Read Complete Report w/ Comic Book examples of this and other False Flag events foreseen in Comic books