Rick Osmon: My Buddy, Red Skelton, Gets His Own Museum 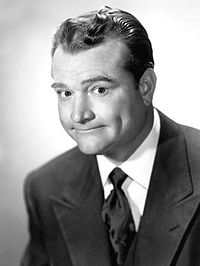 My Buddy, Red Skelton, Gets His Own Museum

He already had his own bridge.

When I was kid of seven or eight, I saved up the labels off Carnation condensed milk cans and sent them in,  “good for” a Halloween mask of one of four of Red Skelton’s characters, Freddie the Freeloader (pictured), Clem Kadiddlehopper, Deadeye Dick, or Cauliflower McPugg. It was about this time of year, early August when the labels were bundled up, taken to the one window, small town post office, weighed on the old fashioned, spring postage scale, stamps applied, and away they went.

In those days, “Please allow 6 to 8 weeks for delivery” meant you’d probably get it in the ninth week. Well, the tenth week came and went and the delay impacted my plans for Halloween, including matching up clothing to go with whichever mask finally was delivered. I mean, after all, a kid’s gotta have everything just right, right?

Around the 20th of October, a package arrived addressed to me and all anticipation was about to peak. I tore the tape off carefully, pried back the heavy pasteboard, removed some packing paper, there was Freddie the Freeloader staring back at me. Almost, the eyes were empty, of course. Almost empty eyes. When I looked more closely, there were more masks under Freddie. For some unknown reason, they had sent me all the possible selections. I lifted each out of the box as carefully as handling a newborn babe, admiring each in turn and showing them off to my mom. I was elated. If I had been a HADD child, I would have been bouncing off the ceiling.

Underneath the masks was an autographed black and white of Red, signed, “Best, Red Skelton”.

Red grew up in Vincennes, Indiana and despite his earning fame and fortune, he still kept up with friends at home. Bob Green was one of those friends and for decades, Bob owned a small chain of hotels in southern Indiana, the Executive Inns. Once in a blue moon, Red would appear in club of one or another of Bob’s hotels. I was privileged to attend one of those shows in Evansville, and I even had the honor of shaking Red’s hand.

And now, in some small way, I get a chance to repay some of the honor that Red bestowed upon me. I express my support for a huge effort underway in Vincennes to honor and commemorate their favorite son, the Red Skelton Museum.