Let’s “Face” It: White American’s are Getting the “Big Head” 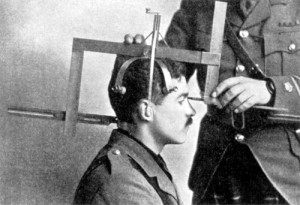 Photo: An anthropometric device (side view) by Major A.J.N. Tremearne designed “for measuring the living head” for “the use of anthropologists”, invented in 1913 with later additions made at the suggestion of A. Keith and Karl Pearson. CREDIT : A.J.N. Tremearne, “A New Head-Measurer”, Man 15 (1914): 87-88. SOURCE Wikipedia

American head shapes have been changing, but why?

White Amer­i­cans’ heads and faces have been changing in shape on av­er­age, and no one knows quite why, according to new research.

In a trend that can be iden­ti­fied go­ing back to the mid-1800s, U.S. skulls have got­ten big­ger, taller and nar­rower as seen from the front, said Rich­ard and Lee Jantz, a husband-and-wife team of fo­ren­sic an­thro­po­l­o­gists at the Uni­vers­ity of Ten­nes­see, Knox­ville. They al­so found that faces have be­come sig­nif­i­cantly nar­rower and higher, though this shift is less pro­nounced than those af­fect­ing the whole cra­ni­um. . . . Read Complete Report

Researchers have identified five of the genes that shape a person’s face, work that could help scientists better understand facial abnormalities like cleft palate and someday might even help forensic investigators determine what a criminal suspect looks like from crime-scene DNA.

Researchers previously knew that genetics played a large role in determining face shape, since identical twins share DNA. However, little was known about exactly which genes are involved. Three genes were thought to have roles in the arrangement of facial features, and the new research confirmed their involvement. It also identified two other genes.  Read Complete Report