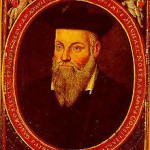 Category: It's a Strange World After All / Tags: 012, 12/21/12, 9/11, future seer, Nostradamus, predictions, prophecy, the man who saw tomorrow
Site built and maintained by Possum Holler Studios