SUBSCRIBE 16K
79-year-old retired CIA agent, Malcom Howard, has made a series of astonishing claims since being released from hospital in New Jersey on Friday and told he has weeks to live. Mr. Howard claims he was involved in the “controlled demolition” of World Trade Center 7, the third building that was destroyed on 9/11. . . . Continue Description of YouTube Video

Featured Photo:  Luke Cremin — amateur photographer “This image just prior to the plane impact with the South tower still, a year later, puts a shiver down my spine.”

Image taken from Atlantic Basin due South of the site of the WTC.” Contributor’s location on 9/11: Brooklyn, New York
Cite as: Luke Cremin, Image #1200, The September 11 Digital Archive, 10 September 2002, http://911digitalarchive.org/images/details/1200

As most investigators know the most important tool in investigating any crime is a phrase made popular in the movie “JFK” by Oliver Stone.  The character Deep Throat played by Richard Sutherland said it during one of the most powerful scenes of the movie when he whispered to the investigator “Follow the money trail.”

This report by highly regarded researcher James Corbett does an excellent job of doing just that in the following report on the 9/11 attack on The World Trade Center. . . . Your Editor Dennis Crenshaw

Forget for one moment everything you’ve been told about September 11, 2001. 9/11 was a crime. And as with any crime, there is one overriding imperative that detectives must follow to identify the perpetrators: follow the money. This is an investigation of the 9/11 money trail.

ZERO: An Investigation Into 9-11 | Full Documentary

This documentary was screened before an audience of representatives and parliamentarians at the European Parliament on February 26th, 2008. It has yet to be shown on British or U.S. television.

This film represents by far the most comprehensive and conclusive documentary yet made on the subject of the 9/11 murders.

Fascism wrecked much of the world and cost countless lives in the last century — it has returned to our century and is infesting our own nations. The people have a right to know – and because the mainstream media is now so often in dereliction of duty it is up to us, the people, to get the information out there.

Dig a Little DEEPER: 9/11 Search for the Truth

Featured Image: The position of Building 7 in relation to the other WTC buildings before September 11, 2001. SOURCE: Wikipedia (Public Domain)

To hear Dan Rather, in his own words, the day of the tragedy, should be enough of a kicker to send you into a tailspin. 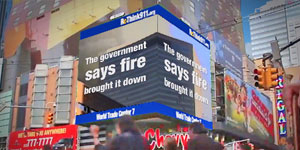 Bill Cooper’s “9/11 prediction” about a false flag terror attack by the New World Order that would be blamed on Osama Bin Laden [on June 28 ,2001].

He made that prediction on 6/28/01 over his shortwave Radio program “Hour of the Time.” There were a lot of Americas who listen to the show.  I personal went out of my way to not miss any of his broadcasts. The patriot movement was growing, and William Cooper’s intellegence reports to the people was revealing too much. He had the Controllers squirming . . EDITOR

And of course everyone knows what happened on 9/11/01. History is History.

Bill Cooper was revealing the slugs under the rocks and their secret agendas. The Controllers didn’t like his educating the masses. He had to go. On 11/5/01 he was gunned down by Sheriffs deputies at his home in Arizona.

The memory of this true Patriot and super American should never be forgotten.  . . EDITOR

Bill Cooper is a man everyone should know about. Few actually do. There should be statues of this man in every town across America! There never will be.. He tried to do the right thing, when nobody else even cared what the ‘right thing’ was.

This time it’s being used to salute William Cooper, a true Patriot.