One of those things featured in magazines back-in-the-day, that never happened. . . EDITOR

WE LIVE IN an era jaded by science’s seemingly routine discovery of basic phenomena-coherent light and the laser; superconductivity and the super-cold realm of zero resistance; weightlessness and its impact upon space electronics. And now, flame amplification. 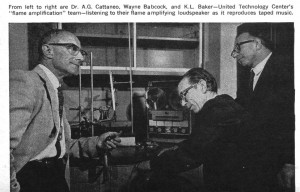 “Flame which behaves physically and electrically like a high-fidelity loudspeaker … and has inherent amplification besides,” explains Dr. A. G. Cattaneo, manager of United Technology Center’s Sunnyvale, Calif., Physical Sciences Laboratory, and one of flame amplification’s three co-discoverers.

So saying, Dr. Cattaneo strikes a match to an acetylene-oxygen fueled welding torch poised on a test stand in one of UTC’s highly classified and restricted laboratories. Carefully, he adjusts the torch’s flame until, blue-hot (about 4200°F), it burns with livid intensity. . . . Read Complete Report