Apocalypse Soon: Has Civilization Passed the Environmental Point of No Return? 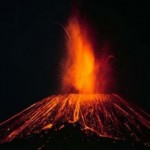 Although there is an urban legend that the world will end this year based on a misinterpretation of the Mayan calendar, some researchers think a 40-year-old computer program that predicts a collapse of socioeconomic order and massive drop in human population in this century may be on target.

Remember how Wile E. Coyote, in his obsessive pursuit of the Road Runner, would fall off a cliff? The hapless predator ran straight out off the edge, stopped in midair as only an animated character could, looked beneath him in an eye-popping moment of truth, and plummeted straight down into a puff of dust. Splat! Four decades ago, a Massachusetts Institute of Technology computer model called World3 warned of such a possible course for human civilization in the 21st century. . . . Read Complete Report

Category: It's a Strange World After All / Tags: apocalypse soon, civilization, collapse of socioeconomic, point of no return
Site built and maintained by Possum Holler Studios