Featured Image: Olga Kurochkina, widow of victim Andrei Kurochkina, claims authorities in Russia are covering up a case of alleged murder and cannibalism after only a few remains of her husband have been retrieved and the accused men are walking free. SOURCE: Siberian Times. (Fair Use).

THE wife of a Russian fisherman who went missing during a trip to Siberia has revealed she has proof that he was murdered and eaten by his friends.

Andrei Kurochkin’s bones were found in the Siberian forest, allegedly gnawed through, and according to Kurochkin’s widow, Olga Kurochkin, the post mortem reveals what she has believed to be true all along

Two fisherman have been accused of carrying her husband’s corpse for a fortnight through remote snow-bound forests feeding themselves from his flesh until there was nothing left after their mode of transport was destroyed. . . . Read Complete Report 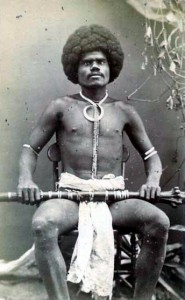 After eating an English missionary in 1867, contrite villagers in Fiji are now eating humble pie and want to say sorry.

Rev Thomas Baker, from Playden, East Sussex, was cooked and eaten by the people of the remote mountain village of Navatusila.

They only thing left of Mr Baker, a clergyman with the Wesleyan Methodist Church, were his leather boots – and they even attempted to chew them. . . . Read Complete Report

Category: It's a Strange World After All, Sorry to Hear That / Tags: Cannibal, devoured, flesh, mates, my husband's

NYPD’s “Cannibal Cop” Convicted Of Plotting To Kidnap Women, Cook them and Eat them. (Video Report)