Stop Bending Over for the Banksters…

Each year – the American economy loses out on billions and billions of dollars thanks to corporations like General Electric and Verizon hiding their profits overseas. Isn’t time to end corporate tax avoidance – and use that tax revenue to stimulate the economy and improve American lives?

Abby Martin highlights the top five companies that aided Nazi Germany during the height of WWII, calling out companies such as Hugo Boss, IBM and Ford. 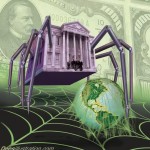 from The Tap Blog

A Tiny Elite Owns 80% Of The Wealth Of the World

Ever since Benoit Mandelbrot discovered “fractals” in the 1970s, the fascinating new science of Chaos Theory has become a part of our collective knowledge base.

Mandelbrot discovered a remarkable “geometry of nature” – in which highly complex systems can be reduced down to a few very simple ingredients.

What if we use this same science to “hack” the world’s economy with super-computers – and see how many corporations actually control it?

Three scientists from the Swiss Federal Institute of Technology in Zurich, led by James Glattfelder, recently did this – and their results were published in New Scientist, a respected science magazine.

Glattfelder’s team unleashed this armada of supercomputers on Orbis 2007 — a very elaborate database of the top 37 million corporations and individual investors worldwide.