I’ve started working on the January 4th 2014 Unraveling the Secrets psn-radio show. Hint about the content:  It is the 1st show so, we’ll start with the 1st. . . . EDITOR 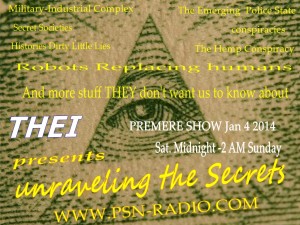 Published on Nov 14, 2012 by DiscloseTruthTV

Publisher of Mysterious World books, Doug Elwell, discussed his research on ancient references to Planet X which connects the work of Zecharia Sitchin to Biblical writings. He noted that astronomers have actually been looking for Planet X for “over 100 years” and clarified that the use of ‘X’ is merely to denote that the object remains, so far, unknown. “It’s not some cheesy science fiction thing,” he declared, “it’s a legitimate scientific endeavor.” Elwell described his interpretation of Planet X as a combination of mainstream science theories on the object along with the voluminous work of Zecharia Sitchen. According to Elwell’s research, Planet X circles through our solar system about every 2,000 years and crosses through the asteroid belt. . . . Read complete report