Key West to Cuba Flights Struggle to Take Off

Featured Image: Concrete marker near the “Southernmost point in the continental United States” located in Key West, Florida, at the corner of South and Whitehead Streets. The spot is only 90 miles as-the-crow-flies from Cuba. CREDIT: Stefan Kokemüller. SOURCE: Wikipedia Commons (This file is licensed under the Creative Commons Attribution-Share Alike 3.0 Unported license).

One of the first sights greeting passengers at the Key West International Airport is a statue of two families with children standing around a large, concrete buoy. “Ninety miles to Cuba,” reads the words etched on the centerpiece.

From that runway, tourists are closer to Havana than they are to Miami. And decades ago, residents of this southernmost outpost in Florida could fly to Cuba for lunch and be back in time for dinner.

It’s only a short flight across the Florida Straits, once crisscrossed regularly. But that hasn’t happened since 1960 and it’s uncertain whether it will happen any time soon. . . . Read Complete Report

Direct passenger flights between Key West and Cuba, suspended in 1962, will resume on Nov. 15, one of the charter companies flying the route confirmed to EFE news agency.

“We feel very emotional about being able to provide this service to the Cuban community with flights from Key West after 50 years and prevent travelers from having to travel to the Miami airport,” Isaac Valdes, sales director for Mambi Travel, told EFE. . . . Read Complete Report 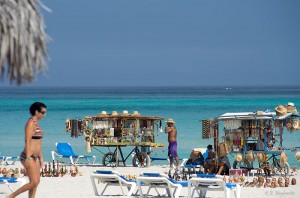 There was a ray of hope recently for those who are looking forward to a car that’s a bit more Blade Runnery as Terrafugia’s Transition flying car made its first public flights at EAA AirVenture in Oshkosh, Wisconsin. There, the Terrafugia team conducted two 20-minute flight demonstrations and also showed off the capability for the Transition’s wings to be folded up so it can be driven about like a car.

AirVenture 2013 saw a dream come true for the Terrafugia team: the Transition street legal airplane flew and drove before the airshow crowds for its first public demonstrations. With footage from the Transition’s on-board cameras and from the ground courtesy of EAA, fly — and drive — along with Chief Test Pilot Phil Meteer for this historic experience.
Learn more about Terrafugia and see how you can join us in creating the future at www.DrivenToFly.com.