“Manchester, NY| A team of archaeologists excavating a drumlin known as  Mormon hill or the Cumorah, in western New York, have discovered a set of gold plates which they believe could be linked to the founder of the Church of Jesus Christ of Latter-day Saints, Joseph Smith Jr. . . .

“. . . The “book” is made of a set of twelve metal plates, each measuring six inches (15 cm) in width, eight inches (20 cm) in length approximately half an inch (1.27 centimeter) in thickness. The plates are made of a copper-gold alloy, and are held together by three D-shaped rings, forming a sort of book.  The entire volume measures a total of nearly six inches [15 cm] in thickness and weights 59 pounds (26.76 kg). . . . Read Complete Repor

Published on Sep 19, 2013
Joseph Smith claimed he translated the Book of Mormon from anciently engraved gold plates, which he took from a stone box in the side of a hill near his home in Manchester, New York. Claiming that he was forbidden by God to show them to anyone, Smith kept the plates carefully wrapped in a cloth or concealed in a wooden box. Believers accept this as God’s way of requiring faith, whereas skeptics suspect Smith constructed a set of plates that couldn’t pass visual inspection. This is the story of Joseph Smith’s bringing the plates home in September 1827. 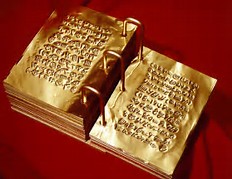 How heavy were the gold plates?

How heavy were the gold plates? (Could Joseph Smith Have Carried the “Gold Book” Three Miles?)

Joseph Smith Documentary (The Masonic Roots of the LDS)