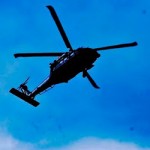 In a shocking display of the police state and the creeping push towards actual martial law, heavily armed military officers in black helicopters swooped through downtown Chicago in what was billed as a routine military exercise.

Up to three Blackhawk Helicopters flew in formation and separately around downtown office buildings and apartments for at least three hours.

A report by the local Chicago Fox affiliate was surprisingly unconvinced by the military’s claims that these exercises had nothing to do with the upcoming NATO Summit:The city’s Office of Emergency Management and Communications on Monday announced that Chicago is the site of a military training exercise this week involving personnel and at least three helicopters.But the bland press release from City Hall did nothing to prepare folks for the jarring scene that unfolded Monday evening.

“It was frightening,” Jessica Hill said. “I was definitely alarmed.

I was pretty amazed,” Felise Llano said, “because they were definitely military.”

A quick look through the various videos of these helicopters flying very low to the ground throughout the city shows just how out of control this country has become . . . Read Complete Report w/ more videos

Taken around Jackson and Halsted.