Tag Archive for Our

America The Fallen: 24 Signs That Our Once Proud Cities Are Turning Into Poverty-Stricken Hellholes

Good jobs were plentiful and a manufacturing boom helped fuel the rise of the largest and most vibrant middle class in the history of the planet.  Cities such as Detroit, Chicago, Milwaukee, Cleveland, Philadelphia and Baltimore were all teeming with economic activity and the rest of the globe looked on our economic miracle with a mixture of wonder and envy.  But now look at us. . . . Read Complete Report

Category: Eyeballin' the One World Order / Tags: 24 Signs, Ameican, Are, cities, Hellholes, into, Once, Our, Poverty-Stricken, Proud, Turning

John Stewart describes how the Monsanto Protection Act was snuck in under our noses. (Video Report) UPDATE: GMO MADNESS CARTOON

Published on Apr 8, 2013
Cut to the chase and get the bottom line on the madness of UFO SECRET (GMO) MADNESS in this hilarious but terribly tragic, fast paced, true look at what is happening to our planet, all at the drop of a hat, cartoon style. Perfect for everyone with a short attention span, ADD, or an inability to concentrate on anything longer than 10-minutes.

From Daily Science: Robotics Integrated With Human Body In Near Future?/ Robots make their own Decisions

Robotics Integrated With Human Body In Near Future? Technology Gulf Between ‘Have’ And ‘Have Nots’ Predicted By 2020

ScienceDaily (Dec. 8, 2008) — Spanish researchers have carried out a study looking into the potential future impact of robots on society. Their conclusions show that the enormous automation capacity of robots and their ability to interact with humans will cause a technological imbalance over the next 12 years between those who have them and those who do not. . . . Read Complete Report

Automation Systems Become Flexible When Robots Make Their Own Decisions

ScienceDaily (Dec. 5, 2012) — Researchers at University West in Sweden have created an automation system where machines and robots make their own decisions and adapt to external circumstances. They continue to work even when something goes wrong. You can reprogram them every day and easily vary equipment and manufactured products. 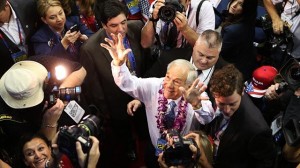