Tag Archive for replacing the US Dollar 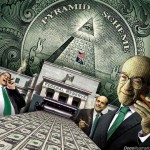