Tag Archive for Took to the Streets

UPDATED:Remember the ALAMO! Patriots Took to the Streets in Protest Saturday (Video) 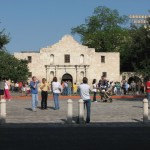 Featured Image: The Alamo in downtown San Antonio Texas. CREDIT: Dennis Crenshaw. Permission to use by anyone if a link back to this page is used if on internet.

Hundreds of patriots, including Alex Jones, took to the streets Saturday, in protest of all illegitimate activity in America.

SAN ANTONIO (INTELLIHUB) – If the people who died at the Battle of the Alamo in 1836 could see this now they would be proud as good patriots took to the streets in protest Saturday. Protestors for liberty turned out in groves and a stage was also set-up for speakers as the crowed eagerly awaited the much-needed message.

After awhile the king of the alternative media and fellow freedom lover Alex Jones took the stage saying, ”Whether it was King George 235-years ago who wanted to disarm slaves or whether it was Santa Anna 177-years ago or whether it was Adolph Hitler or Mao Zedong, these scum-bags are all the same!” Jones continued on ranting with passion, “They are bullies that think we are going to lay down to them and lick their boots! I can assure that if William Barret Travis was here or others that died at this sacred shrine here, that they would give us one hell of a rebel yell!” The crowd followed with major cheers and applause. 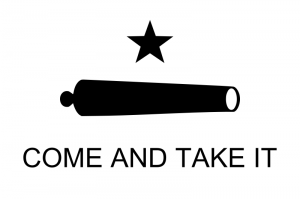 Image:Texas Flag—Come and Take It. This flag was raised by Texas settlers at the Battle of Gonzales in October 1835 after Mexico attempted to retrieve a cannon which had been granted to the town of Gonzales for protection against raids by native tribes. CREDIT:  DevinCook  SOURCE: Wikipedia Commons. (Public Domain)

Jones also pointed out during the speech how they [the globalists] are here to disarm us, mentioning how there “is a fight worldwide to take our guns”. Jones was also open-carrying a rifle as he was granted privilege per the U.S. Constitution and local Texas law. . . . Read Complete Report

From youtube uploaded by Project: Liberty Defined on Oct 19, 2013