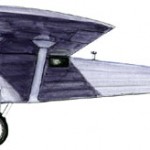 Eighty five years ago, Charles Lindbergh became the first pilot to successfully fly from New York to Paris non-stop, claiming a substantial cash prize and securing a place in history in the process. Now another world record holder, Chip Yates, has announced plans to take on the same aviation challenge … but this time the aircraft making the 3,600 mile non-stop flight will be all-electric. The ambitious project is still in its early stages but the Flight of the Century team has already developed a patent-pending battery deployment solution to replenish depleted batteries while the aircraft is in flight. . . Read Complete Report w/photos