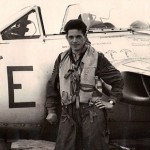 Saucer Sam Sgt Roland Hughes stands beside his fighter with its UFO art painted on by colleagues after he spotted a UFO that was confirmed by radar SOURCE Daily Mail (uk).

A UFO sighting was deemed so credible it convinced a government minister who investigated it.

The sighting by an RAF fighter pilot on a training mission over West Germany in 1952 has been revealed for the first time by papers released by the Churchill Archive at Cambridge University.

Flight Sergeant Roland Hughes was returning to base when he was followed by a ‘gleaming silver, metallic disc’ which flew alongside him before disappearing at incredible sped. . . Read Complete Report