Right! Sounds fishy to me, like the old overused UFOs are’swamp gas’ explanation.  My questions: How long have these fish been mating in these waters and how come it hasn’t been reported before? Swamp gas, fish mating calls. Give me a break. . . .EDITOR

SEATTLE (CBS Seattle) – A fish mating call is being blamed for causing a loud, ominous humming sound that is keeping a portion of West Seattle residents awake at night.

Some have even reportedly been jarred from sleep by the low rumble, sometimes described as a growl, accompanying it.

But the Marine Biology program at the University of Washington may have solved the mystery of its source – the Midshipman fish. . . . Read Complete Report

Original MSM report on the mysterious sounds in Seattle, Washington:

Category: It's a Strange World After All, The Humor of it All / Tags: blamed, Fish, humming, Loud, mating, West Seattle 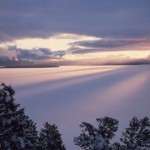