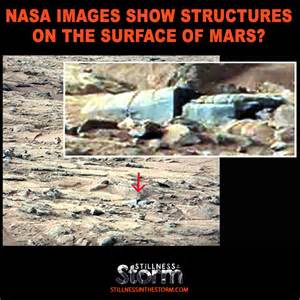 Photos of Structures on Mars

END_OF_DOCUMENT_TOKEN_TO_BE_REPLACED

Plumes seen reaching high above the surface of Mars are causing a stir among scientists studying the atmosphere on the Red Planet.

BEST IF VIEWED IN FULL SCREEN

“This film captures the spirit of Mars pioneers who refuse to let their dreams be put on hold by a slumbering space program. Their passionate urge to walk the soil of an alien world is infectious and inspirational. This film is the manifesto of the new space revolution.” James Cameron

“Swarm robotics is a new approach to the coordination of multirobot systems which consist of large numbers of mostly simple physical robots. It is supposed that a desired collective behavior emerges from the interactions between the robots and interactions of robots with the environment. This approach emerged on the field of artificial swarm intelligence, as well as the biological studies of insects, ants and other fields in nature, where swarm behaviour occurs. . . . Wikipedia

Oct. 27, 2008 — Recent discoveries of water and Earth-like soil on Mars have set imaginations running wild that human beings may one day colonize the Red Planet. However, the first inhabitants might not be human in form at all, but rather swarms of tiny robots.

“Small robots that are able to work together could explore the planet. We now know there is water and dust so all they would need is some sort of glue to start building structures, such as homes for human scientists,” says Marc Szymanski, a robotics researcher at the University of Karlsruhe in Germany. . . . Read Complete Report

From youtube uploaded by David Pakman Show on Oct 5, 2013

“Sep. 16, 2013 — The ESA wants its operations on other planets to have greater mobility and manoeuvrability. SINTEF researchers are looking into whether snake robots could be the answer”…

…”The researchers envisage using the rover to navigate over large distances, after which the snake robot can detach itself and crawl into tight, inaccessible areas. A cable will connect the robot to the vehicle. The cable will supply power and tractive power, i.e. it can be winched back to the rover. Communication between the pair will be facilitated via signals transmitted down the cable.” . . . Read Complete Report

NZ Astronomer debunks Marshall Masters: There is no brown dwarf star (“Planet X”) in our solar system (With Full Video)

VANCOUVER, BC – In an in-depth ExopoliticsTV interview with Alfred Lambremont Webre, New Zealand astronomer David Greg has refuted beyond a reasonable doubt the claims made by “Planet X” researcher Marshall Masters and his team that the Brown Dwarf star system is in our inner solar system and on a trajectory for a cataclysmic flyby of Earth in the 2015-16 timeframe.  . . . Read Complete In-depth Report w/videos.

Earlier this week, new research at the 2013 Goldschmidt Conference in Italy introduced the idea that billions of years ago Mars was a better place to form the building blocks of life than the planet Earth. RT’s Meghan Lopez has more on the new theory.