What If Reality Was Really Just A Sim Universe? (+) Physicists May Have Evidence Universe is a Computer Simulator 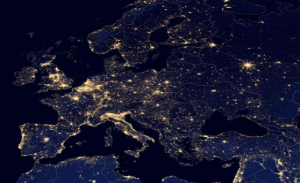 The notion that our reality was some kid on a couch in the far future playing with a computer game like a gigantic Sim City, or Civilization, and we are his characters, isn’t new. But a group of physicists now think they know of a way to test the concept. Three of them propose to test reality by simulating the simulators.

Martin Savage, professor of physics at the University of Washington, Zohreh Davoudi, one of his graduate students, and Silas Beane of the University of New Hampshire, would like to see whether they can find traces of simulation in cosmic rays. The work was uploaded in arXiv, an online archive for drafts of academic research papers. . . . Read Complete Report

Physicists May Have Evidence Universe Is A Computer Simulation

Physicists say they may have evidence that the universe is a computer simulation.

How? They made a computer simulation of the universe. And it looks sort of like us.

A long-proposed thought experiment, put forward by both philosophers and popular culture, points out that any civilisation of sufficient size and intelligence would eventually create a simulation universe if such a thing were possible.

Constraints on the Universe as a Numerical Simulation