A Pool Cue to the Head, by Rick Osmon 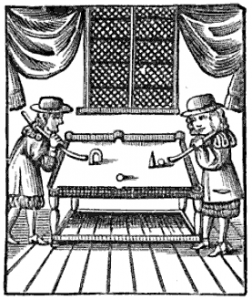 Okay, I’m ready to ban all sports. There are too many deaths and injuries that result from organized play. It’s time the gubment did something. Ban ’em all. Do it for the children!”

Hockey sticks, billiards sticks and billiards balls, baseball bats, croquet mallets, 12 & 16 pound field shot, javelins, golf clubs, bowling balls, even medicine balls have caused a mixture of accidental as well as intentional homicidal deaths. I mean, after all, we banned yard darts didn’t we? We could also say the same of Britain and Australia, those forward thinking examples held up to the world for forcibly confiscating all firearms (in response to a school shooting).

Violent crime worse in Britain than in US

According to the figures released yesterday, 3.6 per cent of the population of England and Wales were victims of violent crime in 1999 – second only to Australia, where the figure was 4.1 per cent.

Scotland had a slightly lower rate of violence, at 3.4 per cent.

In the U.S., only 2 per cent of the population suffered an assault or robbery.

In other words, gun free zones merely make target rich, easy environments for thugs and murderers. The one eyed man is king in a land of the blind. – Rick Osmon

I find it amazing and I find it reprehensible that both the British government and the British press, even the stalwart Daily Mail, refuse to compare violent crime rates before and after the British gun ban went into effect (more than tripled). They also refuse, as do our own politicians, to acknowledge the real reason there is less violent crime in the United States:  We shoot back.

Of course, Great Britain has also banned some of the more dangerous offensive knives, too, like this one with a 1″ blade.

FROM THE OUTSIDE THIS KNIFE LOOKS LIKE A LIPSTICK. ROTATE

THE BRASS COLOURED BARREL TO EXTEND THE BLADE. TYPICALLY OF FAR-EASTERN ORIGIN, BUT SOLD AROUND THE WORLD AS NOVELTY ITEMS. This is clearly an offensive weapon that a thug would use in the commission of a crime. I wonder what Crocodile Dundee would say about this knife during an attempted mugging by violent street criminal brandishing such a dangerous weapon?

Yeah, maybe we do need a plan to curtail such acts of gun violence against innocents and disarmed workers and politicians. Especially politicians.

But why draw the line there? Shouldn’t we also ban bull riding, bungee jumping, drag racing, and hiking? People die while engaged in such dangerous sports. It has to end. We demand a plan!

My plan is throwing all those politicians who are willing to dump our Constitutional Rights (and thereby violating their oath of office as well as our trust) into the general population at the District of Columbia Jail and Sanitarium. It was their own treatment of G. Gordon Liddy, and they deserve to know exactly what it was like for him. Of course, Liddy didn’t use or even carry a weapon during the commission of his crime, (illegal wiretapping). Now the same bunch of vow-ignoring politicians wants us all wiretapped illegally.

The Founding Fathers knew this fight would come. Jefferson expected it to come much sooner. He said:

When the representative body have lost the confidence of their constituents, when they have notoriously made sale of their most valuable rights, when they have assumed to themselves powers which the people never put into their hands, then indeed their continuing in office becomes dangerous to the state, and calls for an exercise of the power of dissolution.