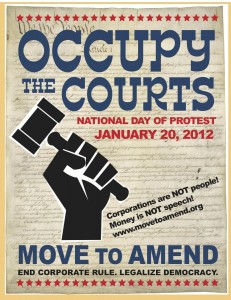 Occupy LA movement activists are suing the city of Los Angeles for their civil rights violations. In November 2011 some protesters were detained while staging an eight-week-long encampment at City Hall teamed up with the Occupy Wall Street movement. Police responded by performing a sweep that affected nearly 300 demonstrators. The group has now filed an A class lawsuit accusing the law enforcement officials of violating human rights and mistreating the protesters in penitentiary. One of the named plaintiffs in the case, Michael Prysner joins us for more.

On November 30th last year around 300 protesters were arrested at the Los Angeles City Hall after being camped out in the vicinity for over two months. An estimated 1400 police officers showed up and blazed through the encampment in what protesters are now calling a “shock and awe” attack on their rights. The movement activists have now filed A class action lawsuit for the arrests and the protesters’ treatment while in custody. RT’s Ramon Galindo brings the latest from Los Angeles

According to reports released by FBI local law enforcement officials teamed up with The Department of Homeland Security in order to deal with the Occupy Wall Street movement. Moreover, the FBI used the term “domestic terrorism” when referring to the non-violent movement. Foya request, an independent journalist and activist Anna Lekas Miller joins us to break it down.