Crime Does Pay (If you can wait-it-out) : 23 years later, this stolen Corvette is still hot 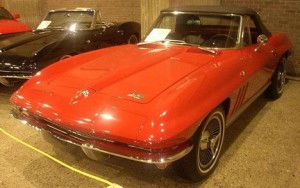 The cherry-red 1989 Corvette convertible that Corky Rice has is in cherry condition.

It ought to be. It still has its original new car invoice sticker on its windshield and a mere 67 miles on its odometer.

The shiny two-seater was stolen in 1989 from the new car sales lot at what was then called C & M Chevrolet in San Diego and driven straight to a nearby self-storage facility, where it was locked in a garage-size unit and left there — for 23 years. . . . Read Complete Report

LOS ANGELES — A mint-condition Corvette stolen from a San Diego car dealership 23 years ago has sold on eBay for the original sticker price.

Category: The Humor of it All, Treasure Chest /