Oxygen to the Core of Earth 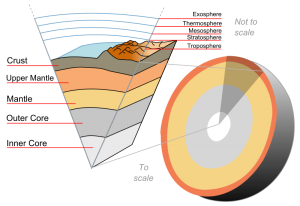 NOTE: The featured illustration of the cutaway of the earth and the article below are written by and for those who believe the establishment scientists THEORY about the makeup of the earth.  They are presented here, as many of the earth science stories featured on THEI, because somewhere buried in these stories is usually a grain of salt adding evidence of a different make-up of our earth than the establishment theory put forth. Never forget. . . the Establishment theory is just that, a theory.  The real makeup of the interior of the earth will not be know until we go there. . . if we ever do.

Thes articles are included to help those looking for those differences that do not support the  unproven establishment theories, you never know what someone will find . . EDITOR

Through a series of laser-heated diamond anvil cell experiments at high pressure (350,000 to 700,000 atmospheres of pressure) and temperatures (5,120 to 7,460 degrees Fahrenheit), the team demonstrated that the depletion of siderophile (also known as “iron loving”) elements can be produced by core formation under more oxidizing conditions than earlier predictions. . . . Read Complete Report