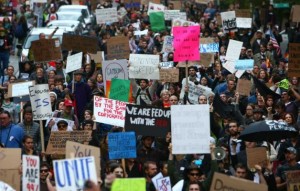 While using the excuse of the false-flag  mass Shootings in America as a reason for the Obama-nation to take the teeth out of the Second  Amendment  and the confiscation of guns from all American’s, the elitist bankers of out “concerned Government” could care less about Richard Castaldo, a victim of the tragedy.  Take our guns . . . Take his house . . . Compassion? Right! . . . EDITOR

Richard Castaldo was shot 8 times during the school schooting at Columbine High School. After surviving the massacre, Castaldo continues to fight, this time for his home in Los Angeles. He fell behind on his mortgage payments and now, his condo is up for auction. However, Occupy activists are standing behind him, trying to keep Castaldo from being evicted.
RT America LIVE http://rt.com/on-air/rt-america-air/
Subscribe to RT America!http://www.youtube.com/subscription_center?add_user=RTAmerica