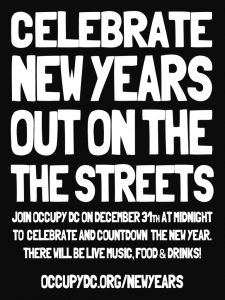 For those who say that the “occupy movement should Occupy the District of Criminals along with the Wall Street Crowd”.  They have been. It’s just that the Controllers do not want to talk, or let too many people about that. people might start to realize that no matter how the press propagandizes it … there is a method to the occupy movement despite the injection of ‘ringers’ and the type of trouble maker that always shows up with any crowd and is used by the Controllers propaganda tools, their controlled news outlets, to make the movement look bad. Works every time. but, maybe not . . . . EDITOR

Occupy D.C. will be celebrating New Year’s at McPherson Sq. with live entertainment, food, and drinks! No matter who you are, may that be a citizen, professional, student, activist, parent, unemployed worker, teacher, professor, votes, or a underrepresented who represent the 99% you are all welcome to participate in the celebration of the new year. 2012 will be a busy year for the Occupy Movement and will be certainly a tough year for the 99%. With a collapsing economy, social injustices, and corruption in politics we hope at least to make the best out of it by starting the year with a massive public party! . . . continue

The Sunlight Foundation has quickly put a video together reflecting on the occupation of K Street today with a strong message. Occupiers and allies from across the country converged on Washington, DC to take over the seat of power: K Street. The K St area is home to America’s most powerful lobbying firms(http://snlg.ht/dcinfluencemap), whose power is measured by cash and access. In the wake of Citizens United v. the FEC that power, access, and, in fact, cash has grown exponentially.