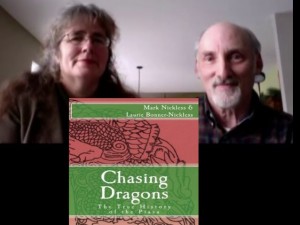 Mark and Laura Nickless are translating an ancient Chinese chronicle, a history of exploration from 1433~34. What they have found so far – and they are no where near done – is a record of exploration to the very heart of North America, surprising evidence of a Mayan influence at Cahokia, and the inadvertent spread of deadly plague that cleared the majority of the populous from the continent.

They will present their findings at the Midwestern Epigraphic Society Spring Symposium, Airport Marriott, Columbus, Ohio, May 31st ~ June 2nd.

In 2004, Mark Nickless and his wife, Laurie Bonner-Nickless, started work on what would later come to be known as the “Piasa Project,” with an article called “Was the Piasa, in Fact, a Chinese Dragon?” published in Outdoor Guide Magazine. Since then, they have presented papers & lectures at international conferences in Nanjing, China (2005), and Melaka, Malaysia(2010), and were invited guest lecturers at a gathering at the Royal Geographic Society in London (2012). Mr. Nickless received a B.A. in Education, in 1976, from Missouri Baptist University, St. Louis, Missouri. He has worked for more than twenty years teaching in special education. Mr. Nickless is a Mensan who is a current member of Missouri Outdoor Communicators. He is happiest when paddling his kayak in pursuit of chain pickerel or wet-wading an Ozark trout stream. Ms. Bonner-Nickless received an A. S. in Cinematography, from Moorpark College, in Moorpark, California, in 1983, and a B. S. in Telecommunications from Southwest Baptist University, in Bolivar, Missouri, in 1990. Both degrees were pursued with a heavy emphasis on writing for those mediums. Ms. Bonner-Nickless is a past member of Missouri Outdoor Communicators (both as an outdoor journalist and a web master.) She has won awards for her poetry, and artwork, and wrote a column on harvesting and cooking wild edibles for several years. Mr. & Mrs. Nickless live near De Soto, Missouri, with their two daughters