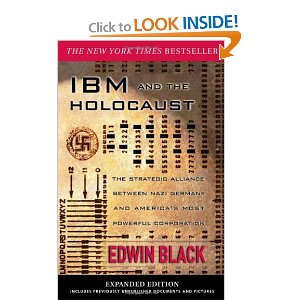 IBM’s Role in the Holocaust — What the New Documents Reveal

Newly-released documents expose more explicitly the details of IBM’s pivotal role in the Holocaust — all six phases: identification, expulsion from society, confiscation, ghettoization, deportation, and even extermination. Moreover, the documents portray with crystal clarity the personal involvement and micro-management of IBM president Thomas J. Watson in the company’s co-planning and co-organizing of Hitler’s campaign to destroy the Jews.

IBM’s twelve-year alliance with the Third Reich was first revealed in my book IBM and the Holocaust, published simultaneously in 40 countries in February 2001. It was based on some 20,000 documents drawn from archives in seven countries. IBM never denied any of the information in the book; and despite thousands of media and communal requests, as well as published articles, the company has remained silent. . . . Read Complete Report