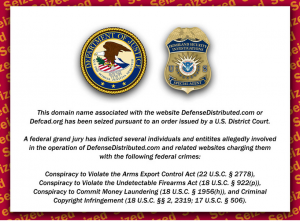 The web domain for Defense Distributed was recently seized, and a notice was placed on the home page stating that individuals involved with the website are being indicted under a grand jury investigation for violating various gun control and intellectual property regulations.

Just a few minutes ago i was doing some research about the progress of 3D printed firearms, and followed a link to the homepage for Defense Distributed, the company that is pioneering the world of 3d printing, specifically guns and ammunition.

I was very disappointed to see the all too familiar federal domain seizure greeting, informing me that not only had the domain been seized, but that individuals involved with the project were being indicted as well. . . .Read Complete Report

Cody R Wilson has figured out how to print a semi-automatic rifle from the comfort of his own home. Now he’s putting all the information online so that others will join him.