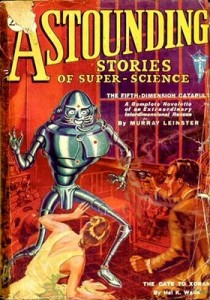 Featured Image: Cover of Amazing Stories magazine ((Public Domain) depicting a robot attacking a beautiful woman while our hero stands behind her pointing a pistol at the metal machine. (Good Luck to him is all we can say . . . EDITOR)

From Space Daily by Staff Writers

A global rights group launched a campaign on Tuesday to ban Terminator-style “killer robots” amid fears the rise of drone warfare could lead to machines with the power to make their own decisions about killing humans.

Human Rights Watch said it was creating an international coalition to call for a global treaty that would impose a “pre-emptive and comprehensive ban” on artificially intelligent weapons before they are developed. . . . Read Complete Report

The Campaign to Stop Killer Robots was officially launched in London on Tuesday (April 23) in an urgent move to preemptively ban the use of lethal robotic weapons that can kill without any human intervention. . . . Description posted w/video.