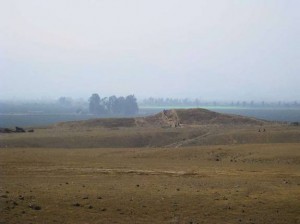 An ancient astronomical alignment in southern Peru has been discovered by researchers between a pyramid, two stone lines and the setting sun during the winter solstice. During the solstice, hundreds of years ago, the three would have lined up to frame the pyramid in light.

The two stone lines, calle d geoglyphs, are located about 1.2 miles (2 kilometers) east-southeast from the pyramid. They run for about 1,640 feet (500 meters), and researchers say the lines were “positioned in such a way as to frame the pyramid as one descended down the valley from the highlands.” . . . Read Complete Report