“If You Don’t Like Obamacare, You Are Racist” (Video Report) 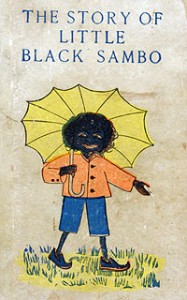 Featured Image: Cover of The Story of Little Black Sambo by Helen Bannerman. The image is most likely from an edition published in 1900 in the United States by Frederick A. Stokes. SOURCE: Wikipedia (Public Domain). FOR ILLUSTRATION PURPOSES ONLY.(Simple used to throw gas on the fire).

The one thing I am tired of with this Administration is that every time someone is against any of the Socialist agenda and anti-American bypassing of the needed Congressional approval by Obama by using his “Executive Orders”  or any other complaint about his actions the liberals claim its “all about Race”.

I am 70 years old and have seen a lot of the elitist President  lapdogs come and go. I have criticized each and every one. I look for the talking points that accompany the laws and actions they have been given as goals during their watch by the Controllers.            ( I believe some of Obama’s Bilderburg walking orders are;to strip American’s of their gun rights; build a more powerful league of goon squad cops; gather everything scrap of information about every citizen by putting the untouchable and unaccountable IRS in charge of our medical histories; clamp down on the internet; and buffer the Alternative Press).  In every Administration prior to Obama’s my reasons for researching and then reporting on whichever in-power presidential puppet of the time was accepted for what it is. . . .criticism of their actions and policies.   Yet if  anyone says anything that the mindless Obama Zombies do not like about Barrack Obama’s policy or direction – true or not – they are instantly a racist.

Example: We have been following the still on-going court cases about Obama’s phony birth certificate since it was first reported.. (Yes Virginia the case is still winding its way through court. CURRENT: The Alabama State Supreme Court is looking into the claims by the law enforcement experts who say their studies proves that Obama’s birth certificate, or the one he claims to be real is in fact a forgery.  They are also currently looking into Berry Obama’s  many social security numbers and other possible criminal action allegations.  Bet you haven’t heard this on CNN, NBC or even FOX have you?  Wonder why?  Stay tuned.)

We started covering the proceedings after Berry Obama refused to honor a legally filed subpoena; “Obama himself, who had been subpoenaed to appear, of course was nowhere near Georgia. Instead, Obama was on a campaign swing appearing in Vegas and in Colorado ignoring the court in Georgia.” In reality what he was doing was thumbing his nose at the court and its officers. “The only ones with something to hide etc, etc. SOURCE: Continuing Coverage: THE OBAMA ELIGIBILITY CASE GOES TO TRIAL IN GEORGIA.

If the current President were 100% white (People seem to forget that Obama is HALF white) anyone could see that in my writings and news posts I would be protesting the arrogance of a person who believes that he is above the law.  You worry about racism and I’ll worry about what the Controllers and Bilderburgs do next.

Obama shows his true color when he legislates. And it ain’t black. Obama is bright Commie Red.

If he does not have to answer to a lawfully issued subpoena or even send a lawyer to answer the summons can the vice president do the same? Can Tiger Woods? No. It just happens that that arrogant man in this case is Obama and he’s half-black. (I Need to research if a man is half-black and half-white can you be a racist towards half of that man?)

Because I started questioning what gives him the right to ignored a lawful summons I began to get comments eluding to the fact that I am a racist.

So because I complain about the fact that Obama is no better than any other citizen when it comes to court appearances although he thanks he is.  And that makes me a racist.

No, I’m not a racist, Obama is an arrogant self-centered sorry excuse for a president who, when his feet get too near the fire gets in lockstep with his flunkies and, as Sgt. Schultz used to say back in the old days on the hit TV series Hogan’s Heroes, “I Know Nothing, Nothing, Nothing.”

Hey I’m afraid of a Administration that when it comes to answering questions about important issues that should be told to the people no body at the top knows nothing. If they know nothing about whats going on, the spying on Americans without proper clearance. Standing down when troops are needed to save Americans, smuggling guns to drug lords in Mexico and on and on and nobody knows nothing!

Here is one of those comments that said that I was a racist because I was following the Birthgate story because the mainstream press refuses to cover. And obama refuses to answer a sapina

Comment on story;4/22/13 Obama Birth Certificate Story Not Going Away

April 28, 2013 at 9:23 pm  (Edit)
Funny you are worried about a presidents birth certificate on his last Term off being president. And what makes you really skeptical the fact That its not printed with a Type writer.
When the previous president Lied about a country saying they had chemical weapons and invades it.  And another country after a bunch of conspiracy’s of taking down a building To invade another country and you are worried about a birth certificate.
Sounds like you got some personal issues with current president and I really don’t think it has anything to do with his Birth Certificate ! ……… Nigger.
~~~~~~~~~~~~~~~~~~~
ADDED  6/1/13; Apocalypse. I did not address some of your comments in the above post in my original response below. I’ll correct that now. The reason it is important that his birth certificate was typed on a typewriter is because back on the day of his birth there were no computers. . According to the law enforcement experts who have examined the document presented as Obama’S  birth certificate its a forgery and computer generated; and the font and paper used to produce the instrument were not used until years after he was born.  Is that true? I don’t know. That’s why we need to find a court or judge who has the balls to take on Obama.  Of course we already know that court official will instantly be branded a “racist.“
As for the high crimes of the former presidents; I reported on every one of them (and still do) just as often as I am with Obama since the crook Richard Nixon and will continue to protest any future presidents who are continuing this aim of s Facist-Socialist World and their plan to destroy this country and our freedoms and way of life.
Be he, white black,brown, or striped red and blue. . . . EDITOR UPDATED 6/1/13 6:30 PM

Apocalypse9;
If you would check my writings back over the years you will find that I worked just as hard trying to expose the Controllers last 5 presidential puppets administrations and have pulled no punches with any of them. Obama is on the same team as Bush and the rest of the slave politions who cater to the globalist elite.

like all liberals (you are a liberal I presume) you want to break everything down to the “Race Card.”

Need I remind you that Obama is not a “black man” he is a ‘white and black man.” But that has nothing to do with this issue. For some reason anytime someone criticizes THIS president there is always someone waiting in the wings to claim it’s “because he’s black.”

Apocalypse 9, just because a person is black doesn’t mean he isn’t human with human traits. We should be able to criticize those traits we do not like. In this case arrogance and putting himself above the laws of our land are unacceptable to me and, if you love this country it should be unacceptable to you.. I see nothing racist in that. So go ahead and try and shock us with your “nigger” word, its you that thinks and speaks with that ugly word. Too bad.

The truth of the matter is that Barrack “Berry” Obama, Baby Bush, Daddy Bush, “Slick Willie’ Clinton, “Tricky Dick” Nixon and all the rest of the modern Presidents have been controlled by Rockefeller and his cronies.  Every American President since Tricky Dick has been hand-picked by the global elitist before the election. They have all been out of step with where I believe our country needs to go.  In fact I believe the Controllers and their hand picked government are leading every man, woman, and child into slavery. And that’s the only black & white issue here.

The main reason for my following the court cases involved here is because of Obama’s ignoring a court order, way back at the start of this story, to produce proof of his eligibility to run for president in the state of Georgia. He ignored that legal State Courts order.
[“Obama himself, who had been subpoenaed to appear, of course was nowhere near Georgia. Instead, Obama was on a campaign swing appearing in Las Vegas and in Colorado ignoring the court in Georgia.]

I only wanted an answer to one question: “What gives him the right to ignore a lawful judges order? But now having followed the Birthgate story closely I’m positive there is something to this story after all.

Whether anything ever comes of it I don’t know. Strange things can happen. We got that sorry crook Nixon out of there didn’t we? I predict that if Obama is caught in any misdoings he will be caught because of his arrogance.

But no matter what; until my question is answered to my satisfaction I will continue to run this series. And you can dream up all of the ‘race” reasons you want. My published history stands as my answer to that stupid charge. . . . EDITOR

Now, for the video below:

Sen. Peterson, use the race card all you want if it makes you feel good. But my question to you.

Pull it out every time it looks like things are not going your way. Fact is, in these court cases challenging his presidency he should at least have the respect to send a mouthpiece.

A PERSONAL NOTE TO OBAMA:  “Sir, he who hides nothing, has nothing to hide”. Bring your papers to court and, like every one else, prove who you are.

Barrack Hussein Obama AKA Barry Soetoro or whoever he is needs to show up in court when he is order by a judge to appear, Just like you and I no matter what our “Race” is.  By the way the race issue will go away when it is no longer convenient to be used to cover any disagreement with the aims of half-white, half black Obama’s Socialist agenda.

I do not SUPPORT Obamacare because it’s another form of control and I think it will hurt our country tremendously in these troubled times.. And for the record I didn’t like Romney-care either – i guess that was because he is a Mormon… actually, birds of a feather flock together no matter what color their feathers are. . . EDITOR

From youtube uploaded by The Western Center for Journalism

LA Dem Party Chair: Those Who Oppose Obamacare Are Racist

Published on May 28, 2013
On May 28, 2013, Louisiana State Senator Karen Carter Peterson took to the Senate floor to argue that her fellow legislators have opposed the expansion of Obamacare because President Obama is an African-American.

Many pundits and journalists, including CBS’ Bob Schieffer, have drawn parallels between the Obama White House’s handling of scandals plaguing the administration and Former President Nixon’s management of Watergate. We looked back in the archives to see just how close they were.

Category: Conspiracy Boogie, Dennis Crenshaw - Editor "Thoughts from an Underground Insider" / Tags: “If You Don’t Like, birther, obamacare, video report, You Are Racist