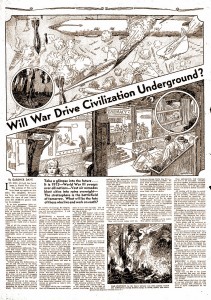 The December 13, 1942 Montana Standard (Butte, MT) ran an interesting piece by Gardner Dane about the world of 1975, devastated by war, forcing people to move underground in order to survive. The original article appeared in Every Week magazine. Excerpts, as well as the article in its entirety, appear below.

Dane sets the stage with a vision of total ruin, a world obliterated by war:

It’s 1975! All hell has burst loose in World War Three! The nations of this earth have lined up again on two sides. The slaughter, devastating fury, and material damage make the wars of past history seem like children’s games with toy tin soldiers! . . . Continue w/Complete 1942 Article