The FBI’s License to Kill: Agents Have Been Deemed “Justified” in Every Shooting Since 1993 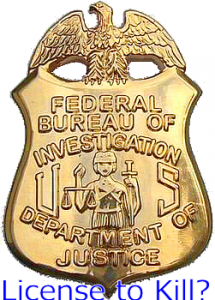 New documents reveal the FBI has cleared its agents in every single shooting incident dating back two decades. According to the New York Times, from 1993 until today, FBI shootings were deemed justified in the fatal shootings of 70 people and the wounding of 80 others. Out of 289 shootings that were found to be deliberate, no agent was disciplined except for letters of censure in five cases. Even in a case where the bureau paid a shooting victim more than a million dollars to settle a lawsuit, the internal review did not find the agent who shot the man culpable. The issue of FBI accountability has recently re-emerged following last month’s fatal shooting of Ibragim Todashev during questioning by agents in Orlando, Florida. He was reportedly unarmed. We speak to Charlie Savage, the Pulitzer Prize-winning New York Times reporter who co-reported the story. . . . Read Complete Report

Category: Life Goes On / Tags: 1993, Every Shooting, Justified, License to Kill Agents, Since, The FBI’s