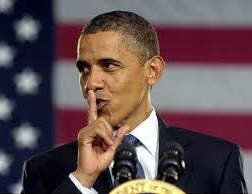 ATTENTION OBAMA-BOT ZOMBIES:: I notice you guys are spending a lot of time writing your opinions on any site that reports the news on the Obama Fake Birth certificate. I just had a wild idea!

Why don’t you spend your time and energy DEMANDING that your congressman or congresswoman conduct a Congressional Hearing on the birther’s claims about the issue. That would settle the issue once and for all. And you could then conduct your energies elsewhere to help your cult leader. I mean, lets face it, Obama really needs you argumentative abilities in other area’s, FBI, NSA, FED, the list goes on and on.

Of course if you are afraid on the outcome of a congressional investigation into just who “Mister Bones” REALLY is, well. . . EDITOR

Team Arpaio: NSA Keeping Obama ID Fraud At Bay; Everything Is A Facade

See our blog to comment on our material…
www.ppsimmons.blogspot.com
Hear Carl Gallups (narrator) every Friday – 1330 WEBY AM – Gulf Coast Talk Radio
Freedom Friday With Carl Gallups
http://www.carlgallups.com LISTEN LIVE ON THE NET or YOUR SMART PHONE!