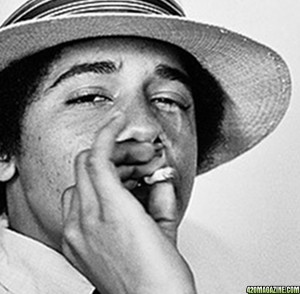 Featured image: Obama admitted to having smoked pot in his “college” days. But what else did he do during that time?  SOURCE:orangejuiceblog.com (Public-Domain).

I just returned from New York, where I attended my 30th Columbia University reunion. I celebrated with my esteemed classmates. Everyone except Barack Obama. As usual – he wasn’t there. Not even a video greeting. Not a personalized letter to his classmates. Nothing. But worse, no one at our 30th reunion ever met him. The President of the United States is the ghost of Columbia University.

I’m certainly no “Johnny come lately.” For five years now (since 2007 when it became clear Barack Obama was running for President), I’ve been quoted in the media as saying that no one I’ve ever met at Columbia can remember ever meeting, or even seeing, our college classmate Barack Obama. Don’t you think the media should be asking questions? Isn’t this a very strange story?

I am a graduate of Columbia University, Class of 1983. That’s the same class Barack Obama claims to have graduated from. We shared the same exact major- Political Science. We were both Pre Law. It was a small class- about 700 students. The Political Science department was even smaller and closer-knit (maybe 150 students). I thought I knew, or met at least once, (or certainly saw in classes) every fellow Poly Sci classmate in my four years at Columbia. . . . Read Complete Report

Barack Obama: The Ghost Of Columbia University: ROOT For America