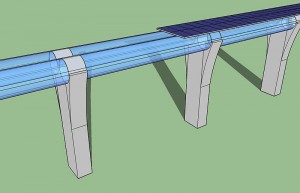 Featured Image: Model of the Hyperloop system as described by Elon Musk. This shows the tubes on pylons and an example of solar panel placement. CREDIT: Edit1306 (This file is licensed under the Creative Commons Attribution-Share Alike 3.0 Unported license).

He may be the man behind PayPal, Tesla Motors and SpaceX, but Elon Musk has been garnering more attention lately for his proposed Hyperloop transit system. Although virtually no details had previously been announced, Musk has stated that it would serve as a much faster, more efficient alternative to traditional passenger rail transport – more specifically, it would allow passengers to travel the 350 miles (563 km) from Los Angeles to San Francisco in just 30 minutes. Well, this afternoon (as promised) he finally let everyone in on just what it would be, and how it would work. . . . Read Complete Report

nothing new under the sun

A Rand corporation physicist has devised a rapid transit system to get you from Los Angeles to NY in half an hour for a $50 fair. He said existing technology made such a system feasible and so does a cost analysis. The essence of the idea is to dig a tunnel more or less along the present routes of U.S. highways 66 and thirty. The tunnel would contain several large tubes for East West travel of trains that float on magnetic fields, moving at top speeds of 10,000 mph. Passengers would faced forwarded during acceleration, backward during deceleration. According to R. M. Salter Jr. head of the physical sciences department at Rand, the idea of high-speed train travel using electromagnetic suspension was first put forward in 1905 and actually patented in 1912. The trains he suggested now would be single cars rather than actual trains, and would be big enough to carry both passengers and freight, including large containers and automobiles. . . . Read Complete Report

Description of a very high speed transit (VHST) system operating in its own rarefied atmosphere in evacuated tubes in underground tunnels. Most cases considered took less time to go coast-to-coast (e.g., 21 min) than it takes an aircraft to climb to an efficient operating altitude. VHST’s tubecraft ride on, and are driven by, electromagnetic (EM) waves. . . . read on Line or Download Download Free Electronic Document of the complete official report