Jetpack Gets Permit To Begin Test Flights (With Video) 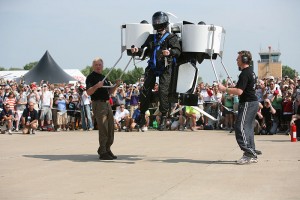 Featured image: This is the first public flight of the Martin Jetpack. It took place at AirVenture 2008 in Oshkosh. The pilot is Glenn Martin’s son, Harrison, 29 July 2008, 10:01. CREDIT: martinjetpack. Uploaded by McGeddon. SOURCE: Wikipedia Commons. (This file is licensed under the Creative Commons Attribution 2.0 Generic license).

The jetpack, inspired by TV shows such as Thunderbirds, aims to allow ordinary people with no specialist pilot training to fly.

The chief executive of Martin Aircraft said the certification was a significant milestone in the development of the jetpack, which the company hopes to start selling next year. . . . Read Complete Report

Category: Advanced Science and Such, It's a Strange World After All / Tags: Jetpack Gets, manned, Martin Aircraft, New Zealand, Permit To Begin, prototype, Test Flights