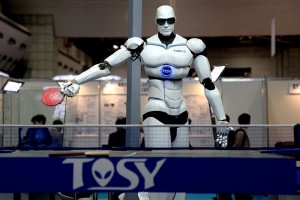 Another report for our Robots into Humans archive. . . EDITOR

(Phys.org) —Researchers designing adult bipedal robots have faced a challenge in limitations in a robot’s walking pattern. They seek ways to improve on designs to have robots move more naturally. Improving the walking function has been the goal of researchers at the Humanoid Robotics Institute at Waseda University in Japan. Last month, led by Professor Atsuo Takanishi, the team presented the results of their efforts at the IEEE International Conference on Robotics and Automation (ICRA) in Germany. What they achieved more closely replicates normal human foot movements than before. . . Read Complete Report