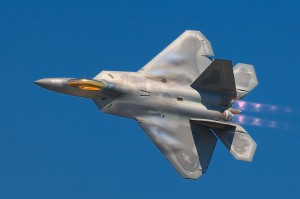 Featured image: A Lockheed Martin F-22A Raptor fighter streaks by the ramp at the 2008 Joint Services Open House (JSOH) airshow at Andrews AFB. Despite many great performances most of those at the show wanted to see the latest USAF fighter. The F-22 did not disappoint! You can just see the vapor trails forming on the wings of this F-22. I also find that the pulsed look of the F-22’s engines to be a really interesting visual effect.
I’ve got to imagine that this would be a very bad view for an opposing fighter pilot to see. CREDIT: Rob Shenk from Great Falls, VA, USA. SOURCE: Wikipedia Commons. (This file is licensed under the Creative Commons Attribution-Share Alike 2.0 Generic license).