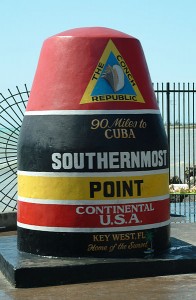 Featured image: Concrete marker near the “Southernmost point in the continental United States” located in Key West, Florida, at the corner of South and Whitehead Streets. The spot is only 90 miles as-the-crow-flies from Cuba. CREDIT: Stefan Kokemüller. SOURCE: Wikipedia Commons (This file is licensed under the Creative Commons Attribution-Share Alike 3.0 Unported license).

We are watching activites in Cuba because we believe that there will be a change brought on by the people in the not-to-distant furture.  If the US would drop the embargo that has been a yoke around the peoples necks since 1962 a revolt of the people would happen very fast.

But then CUBA is a controller experiment to see just how far a free people could be pushed into a socialist world before they rebel.  My inside Cuba connection say things are slowly heading in that direction now.  We’l keep a close watch as things unfold. . . EDITOR

From The Bellingham Herald (OR) Published: October 6, 2013

“The idea is to do things so that the people can perceive us as their defenders,” Farinas said. “We’re going to relegate the political demands because we need more popular support before we can really push them.”

“What real impact the new strategy will have, if any, is uncertain in a country where the government regularly jails dissidents and brands them as “mercenaries” financed by the U.S. government to undermine the communist system. . . . Read Complete Report