Paul Harvey’s Warning to AMERICA: If I were the devil (+) Bob Hudson of Hudson & Landry: Fate of the Mightiest Nation (Audio/Video) 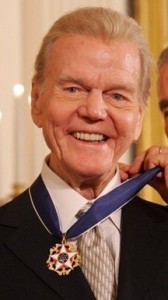 Featured Image: A White House photo of radio personality Paul Harvey being awarded the Presidential Medal of Freedom. The photo was taken by Shealah Craighead and is cropped. The original is here. The White House caption for the photo is:

Back in the mid 1960’s I worked as a pressman in a printing company and we had to take turns taking lunch; half the workers would man the presses while the other half took their break… The only way I agreed to take the job was if my lunch-time had included the time when the late Paul Harvey’s show was on the radio.

Then in the 1970’s I was working construction in the L.A. area. I always took my lunch break so I could listen to the incredibly funny comedy team of  “Hudson & Landry” who had a live daily call-in show. I also bought the 45 record of this essay.

Here are two cases of public warnings by radio personalities of the day warning of our country’s ultimate destruction if we kept heading in the direction we are heading. Few listened. They are  two essay’s from the past we MUST HEAR today!

Share the link to this page with your family and friends. . . EDITOR

Image: Hudson and Landry collection which includes the single, “The Fate of the Mightiest Nation.” Album cover. All of the great comedy of Hudson and Landry is available at their Official web site: HudsonandLandry.com

In a very rare b-side from 1973, Bob Hudson of Hudson & Landry talks about history; past, present, and..future..?
The only serious piece they ever recorded and the only one not written by at least one of them.

Category: Fighting Back / Tags: America, Fate of the Mightiest Nation, Hudson & Landry, If I were the devil, Paul Harvey's, warning