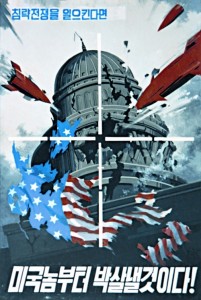 Sneaking into North Korea was one of the hardest and weirdest processes VICE has ever dealt with. In North Korea, if you get caught being a journalist when you’re supposed to be a tourist, you go to jail, or worse. Our rare footage is some of the craziest ever captured, providing an honest look inside the hermit nation.

Shane visits the North Korean side of the De-militarized Zone (DMZ) and surprisingly finds that it’s more relaxed than the South however the propaganda and is out of control. North Korea is serious.

The next stop on VICE’s tour of North Korean propaganda was The People’s Library, this place is weird and creepy – just like everywhere else in North Korea. The creep keeps on coming.